Emma Charlotte Duerre Watson is most famous for her role as Hermione Granger in JK Rowling’s film series Harry Potter, yet her charismatic personality, talent and knowledge goes far beyond the silver screen. Watson has proven to be an avid activist for feminist rights and equality, and has promoted education for girls in Bangladesh and Zambia and in 2014 was appointed by the UN as a Goodwill Ambassador.

Watson, the daughter of two English Lawyers, Jacqueline Luesby and Chris Watson, was born in Paris, France on 15 April, 1990. Watson’s parents divorced while she was still at a young age, which resulted in both parents moving back to England. Her mother moved to Oxfordshire where Watson was then educated and her father lived in London, where she visited on weekends. Pursuing her dream of becoming an actor she attended the Oxford branch of Stagecoach Theatre Arts. Having acted in many school productions, Watson’s first shot at professional acting was when she was picked for her role of Hermione in the Harry Potter Film series. The eight-part series went on to be the world’s 3rd highest grossing film series in history. Critics applauded the young Watson for her remarkable acting throughout the series. IGN wrote that she ‘stole the show’ in Harry Potter and the Philosopher’s Stone in 2001, whilst The New York Times stated that her performance in Harry Potter and the Goblet of Fire was ‘touchingly earnest’[1] in 2005. Furthering her acting career, she went on to feature in many other blockbuster films such as The Perks of Being a Wallflower, Noah, Beauty and the Beast and Little Women. Despite her many successes in film, we felt it was important to feature Watson in our blog for Powerful Women in The Arts, because of the many courageous steps she has taken in her attempt to promote women’s rights and equality amongst the sexes.

After taking on humanitarian work and promoting education for girls in Bangladesh and Zambia, Watson was asked to serve as a UN Women’s Goodwill Ambassador. Upon her appointment she stated that ‘the chance to make a real difference is not an opportunity that everyone is given and is one I have no intention of taking lightly. Women’s rights are something so inextricably linked with who I am, so deeply personal and rooted in my life that I can’t imagine an opportunity more exciting. I still have so much to learn, but as I progress, I hope to bring more of my individual knowledge, experience, and awareness to this role’[2].

At the UN headquarters in New York, Watson was invited to give a speech on gender equality for their campaign HeForShe. Discussing her own experiences of gender inequality, she recollected a time when she was eight. She ‘was called bossy – but the boys were not’ and when at fourteen, she ‘started to be sexualised by certain elements of the media’[3]. Not only was her speech extended as a formal invitation to all men to participate in the conversation for gender equality, but it also inspired the likes of Malala Yousafzai to call herself a feminist.

In the same year Watson travelled to Uruguay highlighting the need for women’s political participation and leadership at all levels. UN Women Executive Director Phumzile Mlambo-Ngcuka commented on her visit saying that “Emma is a strong voice for young people worldwide. Her commitment to the issues that we work on at UN Women multiplies our ability to reach and engage more young people — who are key to advancing gender equality’[4].

In 2017, she featured on the cover of Vanity Fair. Much of the response shone negatively on Watson, calling her out for being a hypocrite in relation to her feminist values due to her breasts being partially exposed in the shoot. Watson responded by stating that ‘feminism is about giving women choice – feminism is not a stick with which to beat other women with. It’s about freedom, it’s about liberation, it’s about equality. I really don’t know what my tits have to do with it’ [5]. 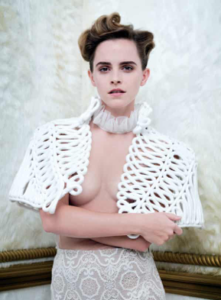 At a time when media has been and continues to be horrendously soaked in ideas of toxic masculinity and the sexualisation of women, it is essential we give Emma Watson a place of pride in our blog, by which we applaud her courageousness to use her platform to put feminism and gender equality at the forefront of today’s media.