Mary Elmes (1908-2002), a Cork woman, was the first Irish person honoured as ‘Righteous Among Nations’ for her work saving Jewish children from the Nazi gas chambers during World War II.

When Elmes, a Trinity College gold medallist and London School of Economics scholar, heard about the Spanish Civil War in February 1937, she decided to assist the refugees by joining the University of London Ambulance Unit in Spain. Elmes was given a feeding station to run, set up at Almería to help cope with the stream of refugees arriving from Málaga. 80,000 women, children, and men had struggled into the town having walked the 120 miles from Málaga, enduring daily onslaughts of bombing and machine-gun fire. More than 5,000 had died en-route, either shot, drowned or starved. This massacre is known as ‘The Caravan of the Dead’.

Although not a member herself, Elmes began working for the Quaker Society, the Friends Service Council, carrying out her refugee relief work in children’s hospitals in Almería and Murcia, before moving to Alicante where she took charge of a hospital there. After having crossed the border into France in 1939, Elmes began to provide relief efforts and cultural activities for refugees from the Spanish Civil War now living in interment camps in France, organising food supplies and providing educational books for children. It is estimated that Elmes and her Quaker colleagues provided school snacks or a midday meal to more than 84,000 children in schools in the south of France threatened by near-famine conditions.

In 1940, France fell to German occupation and thousands of Jewish people and others fled to the south of the country where they were arrested by the French police and held with Spanish refugees. Despite the danger to their own lives, Elmes and the Quakers started a campaign to save as many children as possible. If their parents agreed to it, Jewish children in the camp under the age of 16 could be taken out and sent to designated places. Elmes even hid children in the boot of her car and drove them high into the Pyrenees. It will probably never be known how many children she saved. 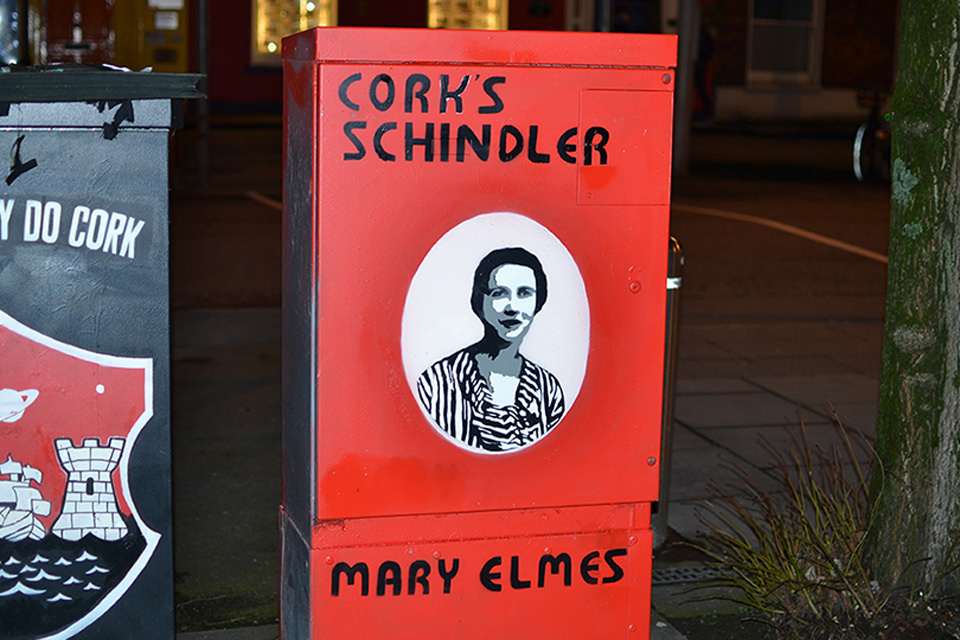 A tribute to Mary Elmes.

In January 1943, Elmes was arrested on suspicion of helping Jews escape. She was never charged, but was first held in Toulouse and then in Fresnes Prison near Paris. After her release, she continued her activities as before. Elmes later dismissed her imprisonment with the words ‘Well we all experienced inconveniences in those days, didn’t we?’ (Bernard Wilson). Elmes refused to accept the salary which had accrued while she was in prison, and likewise the Legion d’Honneur which the French government wanted to bestow on her.

After the war ended, Elmes married Roger Danjou and they settled in France and had two children. Elmes made frequent trips to Cork before her death on 9 March 2002 at the age of 92 (Women War and Peace Research and Resource Book).

On 25 February, 2019 it was announced by Cork City Council that a new pedestrian bridge linking Patrick’s Quay to Merchant’s Quay would be named after Mary Elmes. It was opened to the public on 9 July 2019.

For a detailed account of the life of Mary Elmes, go to page 25 of Smashing Times’ Women War and Peace Research and Resource Book, available to access free of charge here. Also, Clodagh Finn’s bestselling biography A Time to Risk All, tells the full story of the ‘Irish Schindler’. Purchase here. Finally, See you soon Caroline! by Bernard Wilson is a work of fiction based on the true story of Mary Elmes. Buy here.