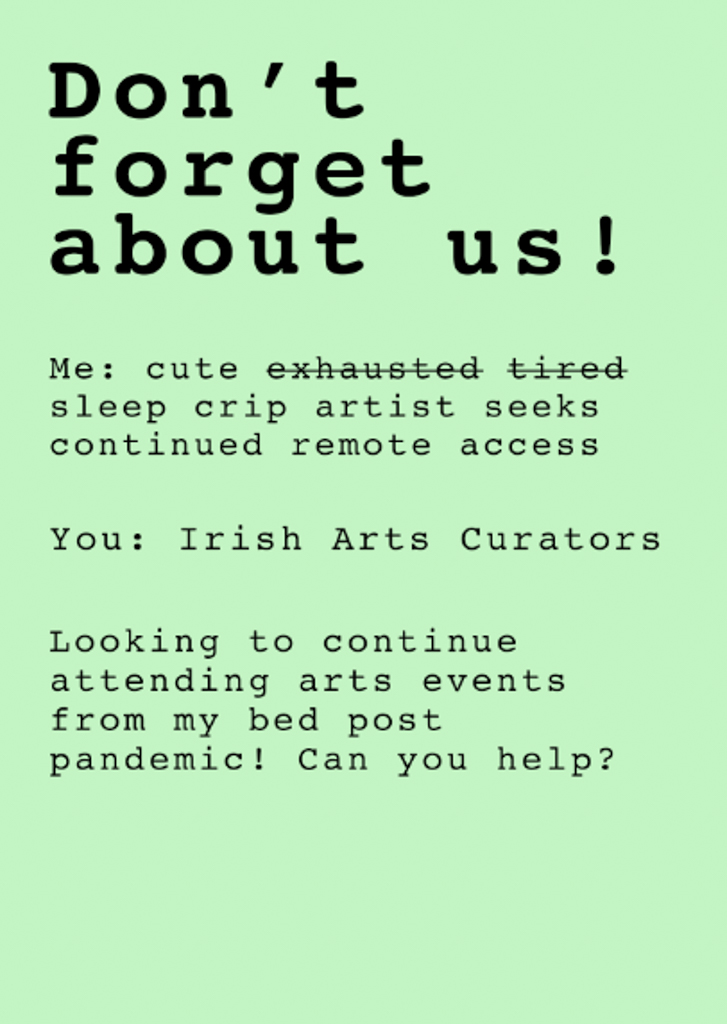 Aine O'Hara-Don't Forget About Us

I want disabled artists to be able to focus on creation without constantly having to use their energy focusing on their access needs. I am inviting those in positions of power in the arts world to meet with me for an access audit, a paid conversation on what they are doing (or not) to support disabled and chronically ill artists in Ireland. Fill in the form here: https://aineohara.com/crip-it-up/

Áine O’Hara is an award winning theatre maker creating exciting and vulnerable work for and about people who are often left out of traditional art and theatre spaces. Áine’s work questions and exposes bureaucracies that oppress those who fall outside certain definitions of ‘normal,’ ‘valuable’, and ‘productive. Áine is interested in intimate one on one performance and often makes work about being a queer, disabled & chronically ill person.

O’Haras long term ambitions include demanding adequate access to theatre and the arts for disabled and marginalised communities through the creation of large scale, ambitious work as well as the continuation of community building projects like Chronic Chats, a creative and social group for chronically ill people run with the support of the A4 Sounds Studios Project award.

O’Haras work has toured nationally and internationally, and she has shown work in the U.K, Sofia, Bulgaria in September 2020 she presented The Owl that lost the Cat, an interactive performance about loneliness and how to connect in a digital society at Survival Kit festival in Latvia.

In 2019 GAA MAAD, an exploration of what it means to be a queer GAA fan and the difficulty in loving a sport and a community that quite often hates and abuses you was selected for the inaugural DUETS programme.

DUETS is an initiative developed by Fishamble: The new play company, Dublin Fringe Festival and the Irish Theatre Institute. DUETS is an artist development scheme that supports theatre makers in the creation of their own tourable productions. GAA MAAD was written and performed by Aine O’Hara & Vickey Curtis at Bewleys Cafe Theatre for Dublin Fringe Festival 2019. GAA MAAD was awarded the Outburst Queer Fringe Award 2019.

Áine has also worked in art departments for film and tv including ‘Red Rock’ currently on Virgin Media One and upcoming Irish feature film ‘Broken Law’ by Paddy Slattery.

Recent achievements: Group show-A consideration of all bodies at The Lab, 2021, Axis Playground Award 2020, A4 Sounds Studios Project Award 2020, during which she created ‘Chronic Chats’ a social and creative group for the chronically ill. GAA MAAD (2019) - which was selected for the inaugural DUETS programme for Dublin Fringe Festival and went on to win the Outburst Queer Fringe Award.