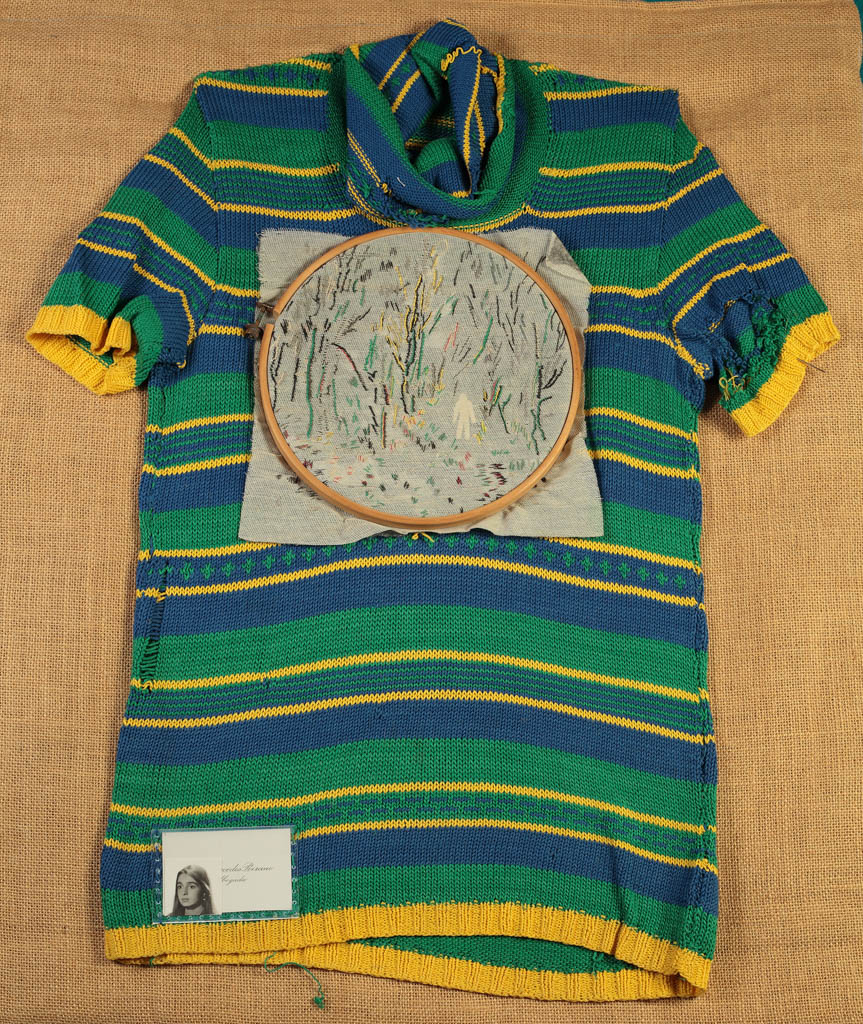 Artist Statement: Edime Peirano was a young Argentinean lawyer who disappeared on 15 April 1977. At the ESMA torture centre in Buenos Aires (The School of Mechanics of the Navy), she was sedated, bundled into a plane and thrown out alive into the Rio de la Plata river. Over 40 years later, Ana Zlatkes picked up the threads and embroidered a forest on Edime’s sweater, using threads from the garment itself. Edime’s sister Alicia imagines that “the last things she saw were the trees … before [being] thrown into the … river”.

Artist Biography: Conflict Textiles is home to a large collection of international textiles, exhibitions and associated events, and is mainly comprised of arpilleras (brightly coloured patchwork pictures) and quilts and wall hangings, all of which focus on elements of conflict and human rights abuses. Conflict Textiles is an ‘Associated Site’ of CAIN (Conflict Archive on the Internet) at Ulster University, Northern Ireland. Making visible the struggle for the disappeared remains at the very core of the collection. Roberta Bacic is the curator of Conflict Textiles and is a Chilean Collector, Curator and Human Rights Advocate living in Northern Ireland. \n Arpilleras (pronounced ‘ar-pee-air-ahs’) can be described as three-dimensional, appliquéd tapestries of Latin America that originated in Chile. These became the medium for women, generally working collectively, to denounce the human rights abuses and repression of the Pinochet dictatorship in Chile from 1973 to 1990. The art of making arpilleras subsequently spread to women’s groups in Peru and more recently to Spain, Brazil, Argentina, the UK, Ireland, Germany, Zimbabwe, Colombia, Canada, New Zealand and Ecuador. Stories of political conflict, anti-war protests, repression, survival, denial, death, disappearances, displacement, indigenous land struggles and transition to democracy continue to find expression in textile form. \n The Conflict Textiles selection of artworks for the Transformative Memories exhibition consists of 12 hanging textiles or arpilleras, one memory box and one set of embroidered, printed handkerchiefs mounted as bunting. \n