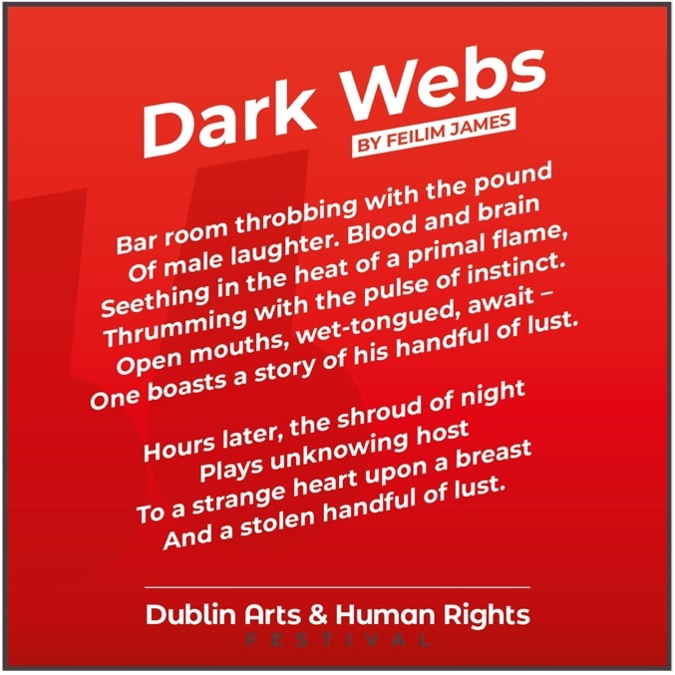 Artist Statement
Féilim’s themes are wide-ranging, and include identity, mental illness, guilt, human animalism, death, and humankind’s relationship with nature. He is committed to maintaining an ever-evolving and progressive approach to his work, with each book both building on the last and differing in a vital way. In other words, the aforementioned themes will change as time passes, as will their stylistic rendering.
This poem, written around 2016 or 2017, explores what we might call toxic masculinity or lad culture. It is a glimpse of male-only bar-room talk, where sexual exploits are gleefully recounted for the purpose of impressing peers and boosting social standing. Alcohol is involved too of course. In such a scenario, fuelled by unchecked or unrefined instinctual urges, women – who are always absent – are conceptually reduced to mere physical form; they amount to no more than a unit of meat and bones, one more body for the ‘body count’. This transpires behind a veneer of joviality, of inconsequence – and yet sexual competitiveness amongst heterosexual males today is far from inconsequential. Ideals, values, ambitions are imbibed (alongside the alcohol), and young, impressionable men are compelled to attain sexual legitimacy, no matter the cost. So in the first stanza we have the insidious bar-room talk, and in the second we have the heinous act that is committed later that night, presumably by a young male who was present during the earlier reminiscences of sexual conquest.
The title, and some elements of the poem itself, allude to WB Yeats’ famous poem ‘Leda and the Swan’, recounting the conception of Helen of Troy as Leda is raped by Zeus, who takes the form of a swan. It also refers to the dark interconnecting webs of influence, patriarchal-misogynistic value systems, and experience which in the worst cases result in sexual transgression. Finally, the title likens the bar- or locker-room talk some men engage in – out of earshot of women – to the internet’s ‘dark web’, the clandestine, anonymous portion of the internet where illicit activity can more easily occur.
The composition of ‘Dark Webs’ drew heavily on my own exasperation with, and distaste for, the type of environment described, and the subtle misogyny interwoven into young men’s sociocultural experiences in Ireland, especially in sporting contexts. I was thrilled to have it included in Smashing Times’ Youth Ensemble’s Flaming Inspirations multidisciplinary performance in October 2017, and I am equally pleased to have it incorporated into this exhibition.

Artist Biography \n Féilim James is an award-winning writer from Dublin, Ireland. In 2020, the Arts of Council of Ireland awarded Féilim a Literature Bursary Award to finish his debut novel, Flower of Ash, as well as a Professional Development Award. He received an Arts Bursary from Dublin City Arts Office in 2021 to finish his first poetry collection, I was a river, lost.  \n His work through Irish, under Féilim Ó Brádaigh, has won seven Oireachtas na Gaeilge literary awards. His short fiction and poetry, through English and Irish, have appeared in a number of journals, including The Fiction Pool, The Galway Review, Icarus, Comhar,  A New Ulster, and the Trinity Journal of Literary Translation.  Visit his website: www.feilimwrites.com \n A short film Féilim wrote, titled The Big No, produced by Smashing Times, was shortlisted by the IndieX Film Festival, and his play At Summer’s End has toured Ireland. At Summer’s End is based on the life-story of Ettie Steinberg, an Irish woman who was murdered, along with her family, at Auschwitz. \n In The Big No, a young man tells the story of his psychological unravelling and subsequent mental health crisis. Told in the form of a voiceover monologue accompanied by compelling imagery, this poetic short film takes us on a journey of despair, introspection, and hope. As he battles against panic attacks and suicidal thoughts, he is forced to face the ‘why’ of his problems head on, learning some essential truths about himself and the world. \n Féilim says ‘My inspirations are many and wide-ranging. To the fore are James Joyce, Sylvia Plath, John Banville, Marilynne Robinson, Ted Hughes, TS Eliot, Seán Ó Ríordáin, and Radiohead’.