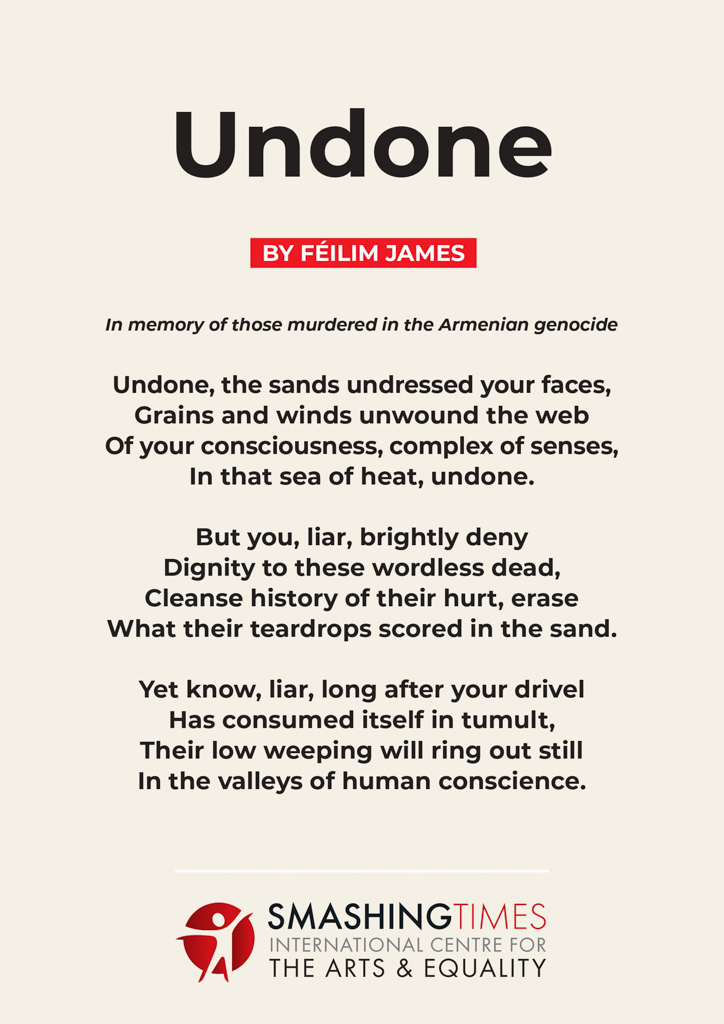 Féilim’s themes are wide-ranging, and include identity, mental illness, guilt, human animalism, death, and humankind’s relationship with nature. He is committed to maintaining an ever-evolving and progressive approach to his work, with each book both building on the last and differing in a vital way. In other words, the aforementioned themes will change as time passes, as will their stylistic rendering.

This poem looks back at the tragedy of the Armenian genocide, where many individuals – particularly women, children, the elderly, and the infirm – were forced on death marches into the Syrian Desert in 1915 and 1916. The poem also tackles the still-widespread denial that the genocide ever occurred.

Féilim James is an award-winning writer from Dublin, Ireland. In 2020, the Arts of Council of Ireland awarded Féilim a Literature Bursary Award to finish his debut novel, Flower of Ash, as well as a Professional Development Award. He received an Arts Bursary from Dublin City Arts Office in 2021 to finish his first poetry collection, I was a river, lost.

His work through Irish, under Féilim Ó Brádaigh, has won seven Oireachtas na Gaeilge literary awards. His short fiction and poetry, through English and Irish, have appeared in a number of journals, including The Fiction Pool, The Galway Review, Icarus, Comhar,  A New Ulster, and the Trinity Journal of Literary Translation.  Visit his website: www.feilimwrites.com

A short film Féilim wrote, titled The Big No, produced by Smashing Times, was shortlisted by the IndieX Film Festival, and his play At Summer’s End has toured Ireland. At Summer’s End is based on the life-story of Ettie Steinberg, an Irish woman who was murdered, along with her family, at Auschwitz.

In The Big No, a young man tells the story of his psychological unravelling and subsequent mental health crisis. Told in the form of a voiceover monologue accompanied by compelling imagery, this poetic short film takes us on a journey of despair, introspection, and hope. As he battles against panic attacks and suicidal thoughts, he is forced to face the ‘why’ of his problems head on, learning some essential truths about himself and the world.