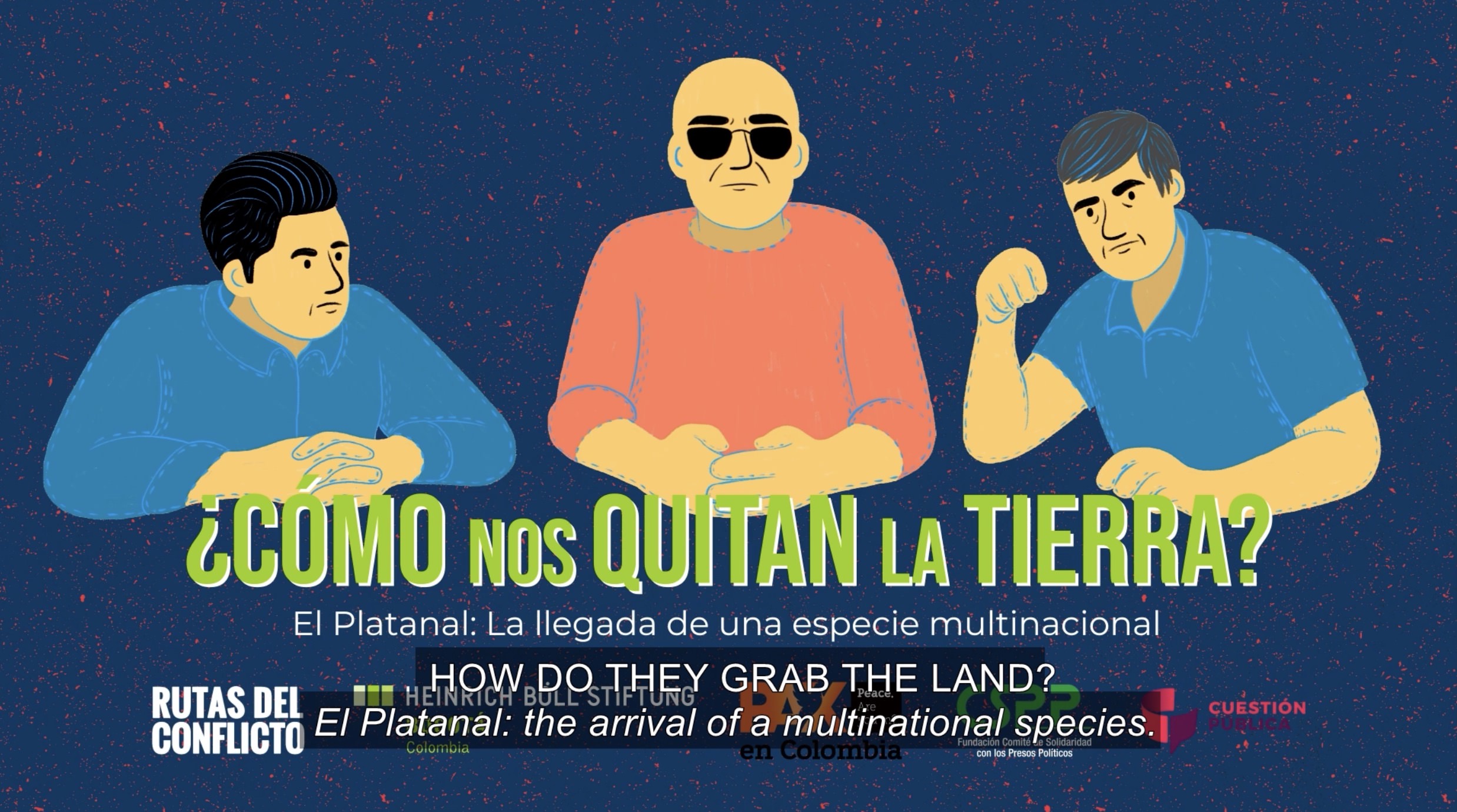 ¿Cómo nos quitan la tierra? (How do they grab the land?)

Artist Statement: Rutas del Conflicto (Routes of the conflict) is an independent and digital native media that gathers reliable information about the armed conflict in Colombia, through the convergence between traditional and digital formats, including data, investigative and citizen journalism tools. The media outlet was launched in 2014, with the motivation to give visibility to events of the armed conflict in Colombia that had not been narrated in official State documents or in the press. Rutas del Conflicto is the first journalistic database in Colombia that documented 728 massacres that occurred between 1982 and 2013. Since then, the media outlet has published its own databases, in-depth reports, multimedia products, documentaries, data visualizations, maps, podcasts and virtual tours (360°). We currently hold a complete and interactive journalistic archive of the memory of the war in Colombia, focusing on innovation as a fundamental element to clarify and socialize events about the armed conflict.
Rutas del Conflicto’s mission is to research, document and make visible stories of war and resistance in an organized and contrasted way, giving prominence to the voices of the survivors. After being published, those voices get easy to find and to understand by an audience that has not necessarily experienced the effects of the war. The media outlet, managed by Con Lupa Foundation, seeks to contribute with victims’ rights claims, journalistic, academic and judicial investigations, and also to be a source for teachers, students, judges, journalists, academics, institutions, social leaders and any interested user.
Rutas del Conflicto, with the support of the Heinrich Boll Foundation, developed a series that tells the story of how a formula of land grabbing was born in Colombia and violently displaced millions of peasants and ethnic communities, dispossessing them of their territories with the help of public servants. In many cases, the same land was used for oil extraction, mining and agro-industrial businesses. The series has two seasons that show the criminal experiment to test the formula of the dispossession in the framework of the armed conflict in Colombia, the expansion of the model, its improvement, and its most recent victims.
For this exhibition, we present a chapter from the second season, “El Platanal: The arrival of a multinational species” (11’32’’), narrated in Spanish, with English subtitles. This chapter shows the story of municipalities in the north of Colombia that during the 1960s produced food and were the epicenter of the national cotton production. During the 1990s, they were converted into an area of large-scale coal mining. Nowadays, they are known as the mining district of La Jagua, a fertile land –rich in water– whose community has suffered land dispossession and expulsion of the place to give space to mining exploitation. The victims have been waiting 10 years for the restitution of their land, aiming to continue with their peasant life.
You can access all the videos, with Spanish narration, at https://rutasdelconflicto.com/especiales/nos-quitan-la-tierra

Artist Biography: Fernanda Barbosa is a Visual Art and Photographer from Columbia specialising in illustrations on land dispossession. \n Alvaro Avendaño is a journalist, photographer and audio-visual producer with experience in project formulation, coordination and articulation of interdisciplinary teams. He has been a teacher with an audio-visual approach and has led the production of content and images in documentary research projects on academic, social, environmental and Colombian armed conflict issues. \n Ivonne Rodríguez, master in Political Studies and Social Communicator, is a journalist, and has 12 years of experience in documenting the Colombian armed conflict and its transitional justice processes. In 2019, she joined the Colombian Truth Commission, coordinating the research team on forced displacement and land dispossession. She worked for 10 years at Verdad Abierta media outlet. \n Juan Daniel Vargas is a musician, composer and teacher. He graduated from the Fernando Sor music school, and the National Pedagogical University. He is pursuing a master’s degree in Colombian music at the Universidad del Bosque. He is passionate about jazz, Latin American and Colombian music. As a composer, he covers genres of academic, popular and programmatic music and has been musicalizing audio-visual projects, series and podcasts about the memory of the country.\n Juan Manuel Rueda is a journalist and philosopher whose work focuses on communication projects on social issues, human rights and environment, and he has been outstanding in audio-visual production. Currently he is content editor of the Paz & Reconciliación (Peace & Reconciliation) Foundation in Colombia. \n Nicole Acuña Cepeda is a journalist and audio-visual producer with experience in researching issues related to human rights, armed conflict, environment and transitional justice. She was the audio-visual director of the miniseries ¿Cómo nos quitan la tierra? and is currently part of the communications team of the Colombian Special Jurisdiction for Peace (Jurisdicción Especial para la Paz -JEP).\n Oscar Parra Castellanos, undergraduate and graduate university professor, is a journalist specialized in data journalism and digital development, with advanced computer skills and experience in investigative Journalism, content editing, teamwork, and working with political sources. He is a director of Rutas del Conflicto and a speaker in seminars on journalism, including themes like digital coverage on politics and multimedia projects. \n Pilar Puentes Espinosa is a journalist from Universidad del Rosario, in Colombia, currently studying a specialization in Land Law. Since 2018, she has been a reporter for Rutas del Conflicto, focused on human rights, land conflicts and socio-environmental problems. \n She is winner of the SIP (Interamerican Press Association) Award in 2020 and co-author of the book 'Tierra, la raíz del conflicto' (Land, the root of the conflict). \n Rowena Neme, is a Visual Artist, Illustrator and Comic Artist. She has experience in editorial illustration and has worked with independent media, press, social organizations and editorials. Her work is mainly related to current social, political issues, and historical memory of Colombia. Her first published comic book is ‘Yo no corrí frente al miedo’ (2018) by Intermedio editores. She is also part of the first Comic Anthology of the 4 Mesas collective (2020). \n https://rutasdelconflicto.com/ \n https://www.facebook.com/RutasDelConflicto/ \n https://twitter.com/rutasconflicto @RutasConflicto \n https://www.instagram.com/rutasdelconflicto/ \n https://www.youtube.com/channel/UC2RH4Q5OnTw9EdF2MxN4A1VQ/videos \n