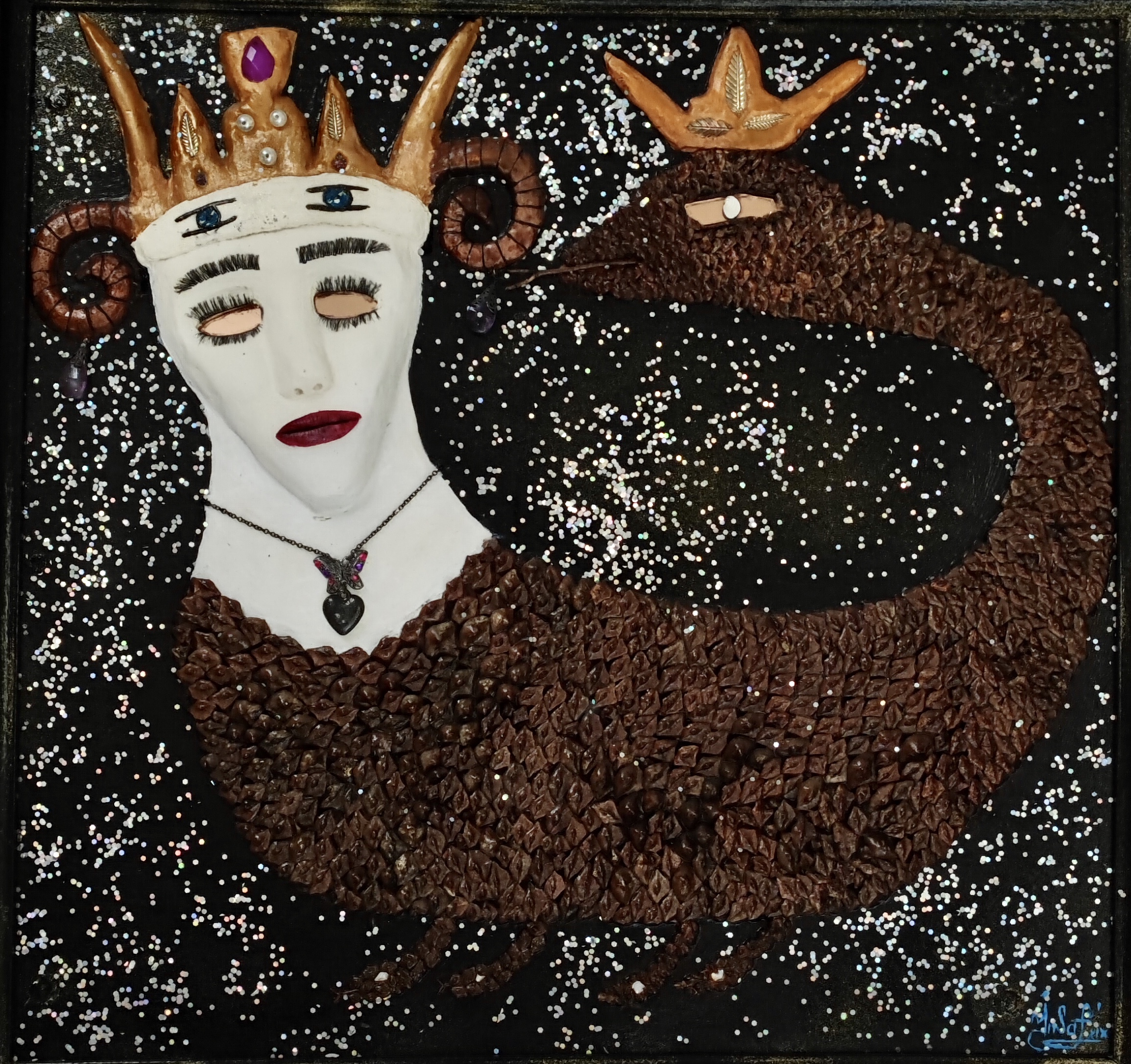 Artist Statement: Shahmaran is a goddess in Kurdish myth, half snake and half woman. She had to move her heaven from the sky to the underground because of human betrayal. She established her heaven again. She is the first migrant. When I was in a Direct Provision centre, I thought I shared a similar story with Shahmaran and I collected some pine cones nearby. I made her using pinecones and plaster and tried to establish my heaven here again.

Artist Biography: Insaf Yalcinkaya is a Kurdish poet born in Dersim in the Turkish part of Kurdistan. After a Bachelor’s degree in Business, she taught in primary and secondary schools. She was a political activist, and also Political Consultancy Advisor. She studied part time for a certificate in Ceramic and Glass technology, and ceramic formalization. She has been working as a poet and visual artist in Turkey and in Ireland. She has also shown ceramics and text-work, most recently from July to August 2021 in “Sinterella” at Glór in Ennis. \n She made a short film for the “Maternal Gaze” project at IMMA in April 2021, and gave the Mask, Myth and Multiple Cultures workshop at IMMA in September 2020. She exhibited work online with Angelica Network in September 2020. She is a member of Art Nomads artist collective and have exhibited with them at “Imagine” in June 2020 as part of world Refugee Week with Christ Church Cathedral and Counterpoint Arts as well as the show “Transhumance” in the Space Gallery in Dublin 7 in February to March 2020. She has short film experience as a screenwriter and a director. She has been involved in several art exhibitions in Turkey. Her articles have been published in national and local magazines and newspapers in Turkey. She has started to collect her poems. \n After she moved to Ireland, she began to translate her poems into English. Her poems are published in Correspondences, an anthology to call for an end to direct provision by Stinging Fly, in the MASI journal by MASI, in Flare 14 and Flare 15 by Dublin’s Sunflowers Session. Also, she contributed online with a poem to Pendemic.ie. She was a member of Dublin Writers Forum from September 2017 to 2020, and joined Poetry in The Park Killarney. \n She was a member of Catherine Young’s Dance Group. She participated in the Big Bang Rhythm festival 2018-2019 in Dublin and Several times in Kerry as a member of Catherine Young’s Dance Group. She read her poems during some poetry events open mic in Dublin and Killarney. For instance, during Kilmainham and Inchicore festival 2017, Poetry in Ireland at Cabra library open mic, Inchicore Library open mic, Books Upstairs as a reader. At Lord Edward, Sunflower Session as a reader. She was a performer at the Phizzfest – Phibsborough Community & Arts Festival 16th January 2020. She was a member of Killarney Drama Circle where she was involved as a player and a musician.She likes art, music, drama and dance.