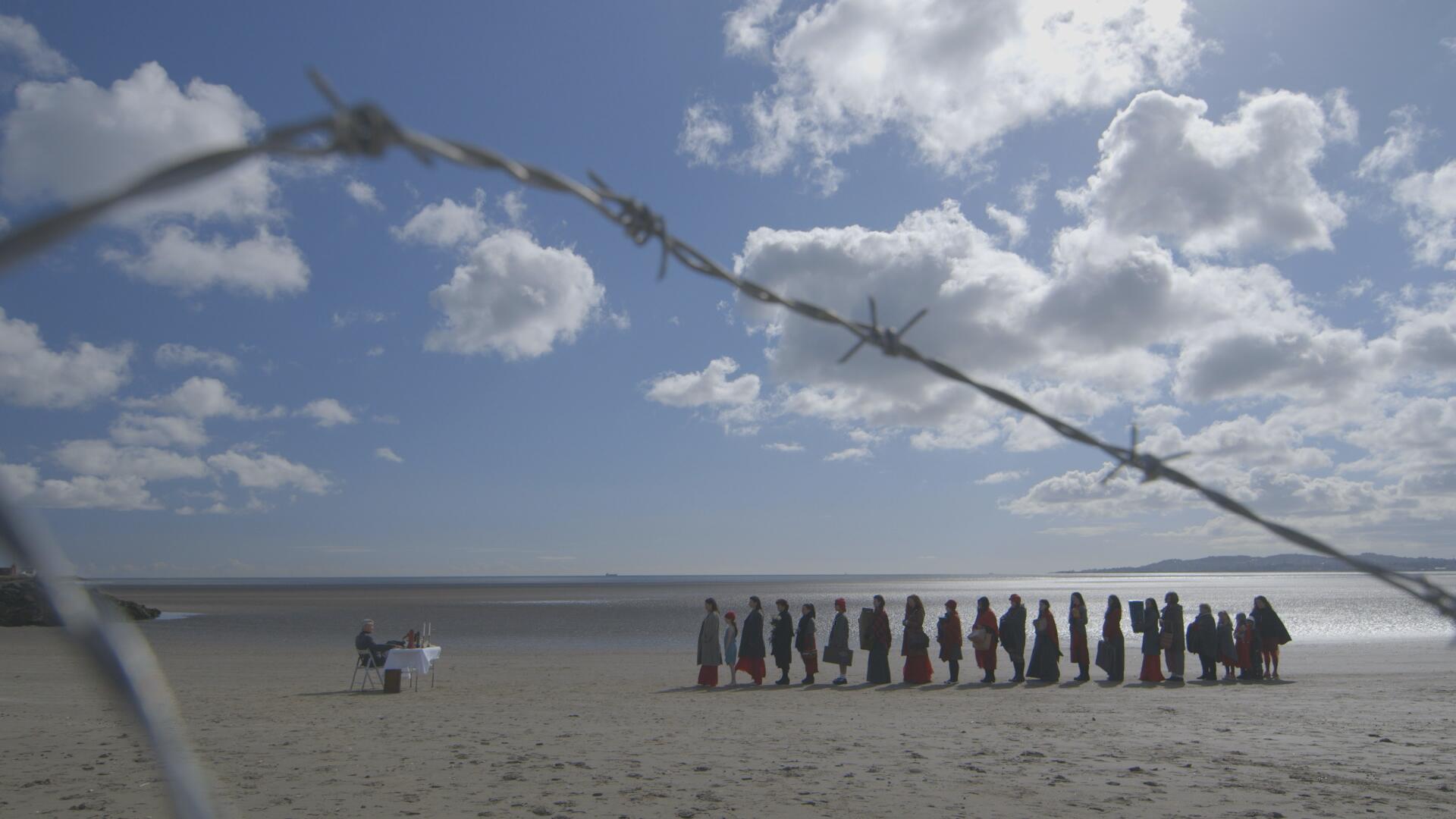 Mary Moynihan-Tell Them Our Names

Opening on an anonymous beach in Europe, a group of women and children line up in front of a bureaucrat’s desk, only to be barked at by a gatekeeper. But the women are not silent. They are here for a reason. An unexpected act of violence is carried out, as the women become authors of their own stories.  Tell Them Our Names is an imagined re-creation of moments from the lives of five powerful women during WWII recalling moments of bravery, sacrifice and love amidst the horror of war, as women stood up against Fascism and totalitarianism and refused to accept oppression.

Tell Them Our Names is a short art film by Mary Moynihan, starring Fiona Bawn Thompson, Raymond Keane, Margaret Toomey, Ella Moynihan Brady, Mary Moynihan and Romana Testasecca. The film was screened at the London Eye International Film Festival, the Kerry Film Festival and as part of Café Europa at Leif Theatre, Scotland. The film is directed by Mary Moynihan, scripted by Paul Kennedy, Mary Moynihan and Fiona Bawn Thompson from a devising process with the cast, the editor is Mark Quinn, the Lighting Camera people are Ken O’Mahony and Matt Kirrane, and the film is produced by Smashing Times Theatre and Film Company in association with High Wire Ltd.

The women whose stories have inspired the film are Marta Hillers (Germany), Mary Elmes (Ireland), Maria Eugenia Jasinska (Poland), Neus Català Pallejà (Spain) and Dolores Ibárruri, La Pasionaria (Spain). Their stories have mostly been unheard or buried, now they are voiced. Set in the context of World War II and the Spanish Civil War, these powerful women speak of harrowing acts of oppression and inhumane treatment, yet still, despite all the odds, the spirit of defiance and hope rings through.

Marta Hillers (1911-2001) was from Germany and  wrote her autobiography Eine Frau in Berlin (A Woman in Berlin) under the name ‘Anonyma’ (Anonymous), detailing her experiences of the last days of WWII as she and over one million other women were raped and abused by Allied soldiers of the Red Army. Mary Elmes (1908-2002), was a Cork woman who was the first Irish person honoured as ‘Righteous Among Nations’ for her work saving Jewish children from the Nazi gas chambers during World War II. Maria Eugenia Jasińska (1906-43) from Łódź in Poland worked for the resistance and gave up her own life rather than ‘name names’. Neus Català Pallejà (b. 1915) from Spain, was a member of the United Socialist Party of Catalonia during the Spanish Civil War, an active collaborator with the French Resistance during WWII and was a Spanish survivor of Ravensbrück, one of the largest concentration camps set up by the Nazis especially for women. Dolores Ibárruri, or La Pasionaria (1895-1989), from Spain, was a revolutionary leader, political activist, Communist and crusader against Fascism during the Spanish Civil War who created the famous cry ‘They Shall Not Pass’.

Tell Them Our Names was created as part of Women War and Peace, a European transnational project co-funded by the Europe for Citizens programme of the European Union and implemented by four partner organisations from Ireland, Spain, Germany and Poland. The project uses Creative processes of theatre and film to explore the role of women in Europe from World War II to the present and the power of the EU in promoting peace and gender equality today. The partner organisations are: Smashing Times Ireland, www.smashingtimes.ie; IFES, Valencia, Spain, www.ifes.es; Gottfried Wilhelm Leibniz Universitaet, Hannover, Germany, www.uni-hannover.de;  and University of Humanities and Economics in Lodz, Poland, www.ahe.lodz.pl.

According to artist Mary Moynihan, ‘In relation to my overall artistic practice, my influences have been the people I love,  nature as a way of being and a sense of mystery and a desire to stand up against injustices.   I am drawn in by historical memory, alternative narratives and what is hidden or unseen especially stories that live in liminal spaces and on the edge.

The arts are essential for imagining new visions for the future and  now more than ever we need to come together to create the type of world we want to live  in, to promote and protect democracy and human rights. It is important to remember that democracy is not a given and it can be taken away.  The arts provide a  unique and valuable opportunity to raise awareness of human rights, gender equality and diversity and can bring people together to celebrate and promote human rights into the future.

I created Tell Them Our Names as part of my artistic work with the Smashing Times International Centre for the Arts and Equality using arts-based projects  to focus on women’s stories in history, using theatre and film to explore women’s lived experiences from the past and how they influence us today.  A key aim is to change the narrative of history and to re-write women’s stories back in. There are many incredible women’s stories out there that deserve to be acknowledged by a wider audience.