‘Besides being entertaining, movies can inspire, and teach, and even be healing.’

Jane Fonda is a two-time Oscar-winning actress and prominent social activist. Born in 1937 in New York, her father was Henry Fonda, a prominent actor, and her mother Frances Seymour Brokaw, who died by suicide when Fonda was 12 years old.

Having studied Art in Paris, she returned to the US to study under Lee Strasberg at the Actor’s Studio in the 1950s, and focus on acting as her career. [1] Her first appearances included the Broadway play There Was a Little Girl (1960) and the film Tall Story (1960). Fonda went on to appear in several comedies in the 1960s, including Cat Ballou (1965) and Barefoot in the Park (1967). Her subsequent roles were more substantial and focused on socially conscious topics with her portrayal as a call girl in Klute (1971) earning Fonda her first Academy award. [2]

During the late 60s she participated in the Black Panther Movement with Bernie Whiteclaw and Native American protestors who were protesting in response to the declining state of their reservations. She used her influence as a celebrity figure to throw her weight behind the causes that she believed were right or just.

The 1970s were when Fonda’s activism became most prominent, namely her involvement with the anti-war movement sweeping the US in response to the ongoing Vietnam war. In 1970 she was arrested for the first time, while crossing back over the border to the US after an anti-war speaking event in Canada. Her mugshot became an iconic symbol of her activism. [3] 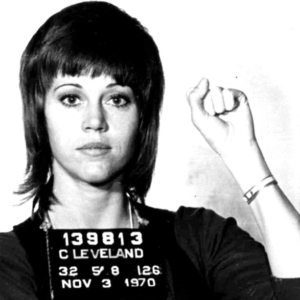 In 1972, Fonda accepted an invitation to speak in North Vietnam, and appeared on radio stations to speak out against the US’s military policy in Vietnam. It was on this trip that she was photographed sitting on top of an anti-aircraft gun in Hanoi; a weapon used to shoot down US fighter planes. This gained her the infamous nickname, ‘Hanoi Jane’. [4] 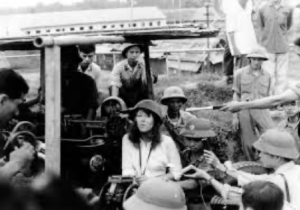 The photos, along with her public criticism of US leadership and its military policy led to huge outcry against Fonda among American officials and war veterans, with some organisations calling for her to be tried for treason. [4]

Fonda used her position in Hollywood to create artistic work that was inspired by some of the people she had met while undertaking her work as an activist. In 1978 she won her second academy award for her role in Coming Home, a film about a woman who meets a wounded war veteran, and whose husband is in the US Marines. [3]

Upon winning the award, Fonda signed part of her acceptance speech. This was an act of recognition of something she had learned during the filming of Coming Home: that the world is built to suit one type of person or body, and anyone who differs from the norm can be excluded. Fonda hoped that by signing part of her speech, she could share part of the evening with the deaf community.

In more recent times, Fonda’s activism has focused on the environment. Inspired by Naomi Klein’s book, On Fire: The (Burning) Case for a Green New Deal, and with the aim of supporting Greta Thunberg’s work, Fonda started Fire Drill Fridays in 2019 on Capitol Hill in Washington DC. These weekly protests are against US leadership, demanding that those in charge ‘end fossil fuel expansion, pass a Green New Deal, and implement a plan for a responsible just transition of existing fossil fuels as rapidly as possible.’ [5] Despite being in her 80s, Fonda has been arrested five times for her involvement in these protests, and shows no signs of wanting to slow down her work for the cause. In an interview with the Washington Post published on 24th December, 2019, she said:

‘We have to get used to being in the streets. I mean, if necessary, we’re going to have to shut the government down. And that’s not radical. What is radical is not doing anything — given what that will lead to.’ [6]