Greta Thunberg is an environmental activist student from Stockholm, Sweden. When Greta was aged nine, and in third grade, she developed her special interest in the climate crisis. She learnt how humans, through their actions, can influence the climate – for good or bad, and wondered why more people were not talking about this. She along with her family made small lifestyle changes like giving up meat, growing their own vegetables, and installing solar batteries while she kept researching more on climate change for six years. In 2018, following the hottest summer ever, Greta Thunberg decided to go on school strike to get politicians to pay attention to the climate crisis and the impending catastrophe. She refused to go to school until Sweden’s general election on 9 September 2018, to make herself heard. For two weeks everyday, she sat outside the parliament in central Stockholm with a placard bearing the slogan, which read: ‘School strike for the climate’.

Greta demanded that the Swedish government must take charge to reduce the country’s carbon emissions as stated in the Paris agreement on climate change. While adults and her well-wishers advised her to not miss classes, Greta candidly shared her viewpoint stating: ‘I have my books here… But also I am thinking: what am I missing? What am I going to learn in school? Facts don’t matter anymore, politicians aren’t listening to the scientists, so why should I learn?’ 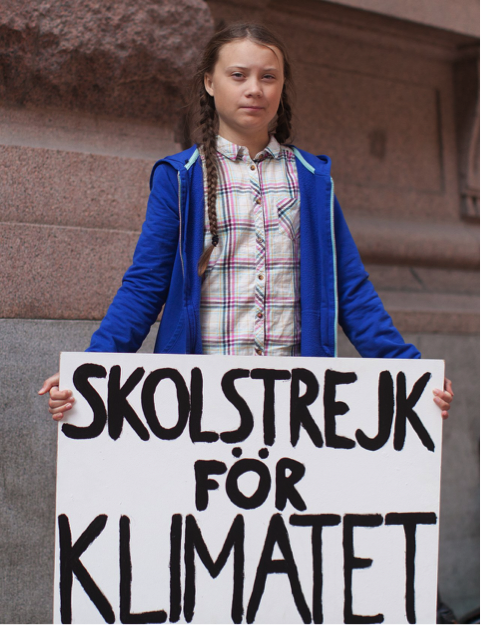 Following 9 September 2018, Greta continued to be on strike from school every Friday. Her solo protest has gradually gained support within and outside Sweden. More than 20,000 students across the world joined her by striking from school, to push for climate change legislation. It is reported that the protest has spread to at least 270 towns and cities in countries across the world, including Australia, the United Kingdom, Belgium, the US and Japan.

For fellow school students, Greta said: ‘You don’t have to school strike, it’s your own choice. But why should we be studying for a future that soon may be no more? This is more important than school, I think.’ Greta is also taking help of social media platforms to spread the word and was glad to be able to make herself being heard by so many students across the world.

With the protests spreading like fire, the Leadership were bound to listen and offer Greta a platform to put forth her views and proposition. On 4 December 2018, Greta Thunberg addressed the COP24 United Nations climate change summit, where she met with UN Secretary General Antonio Guterres. She presented and explained the severity of the problem this way: ‘What I hope we achieve at this conference is that we realise that we are facing an existential threat. This is the biggest crisis humanity has ever faced. First we have to realise this and then as fast as possible do something to stop the emissions and try to save what we can save.’ At a later press conference, she said ‘I will not beg the world’s leaders for change. I will tell them that change is coming whether they like it or not’ (I Know Waste.com).