Rosa Parks (1913-2005) was an African American civil rights activist best known for her refusal to vacate a seat on a bus for a white passenger in Alabama, 1955. This act, and her subsequent arrest and trial, precipitated the 1955-56 Montgomery bus boycott. After an almost yearlong boycott of the municipal bus company, on November 13, 1956, the US Supreme Court upheld a lower court’s decision declaring Montgomery’s segregated seating unconstitutional. The boycott, which had ended in success, was central in launching the US civil rights movement, and, for her role, Parks was dubbed the ‘Mother of the Modern-Day Civil Rights Movement’ (Biography Online). 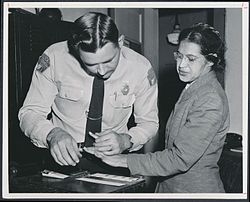 Parks remained active in the National Association for the Advancement of Colored People (NAACP) through the years, also working as a member of the staff of Michigan Congressman John Conyers, Jr. In 1987, she co-founded the Rosa and Raymond Parks Institute for Self Development to provide career training for young people. She received many awards, including the Presidential Medal of Freedom (1996) and the Congressional Gold Medal (1999). Her autobiography, Rosa Parks: My Story (1992), was written with Jim Haskins (Encyclopædia Britannica). Her pivotal role in the history of civil rights has made her an iconic figure around the word. She died in 2005, aged 92.

Click here to read an interview with Rosa Parks.