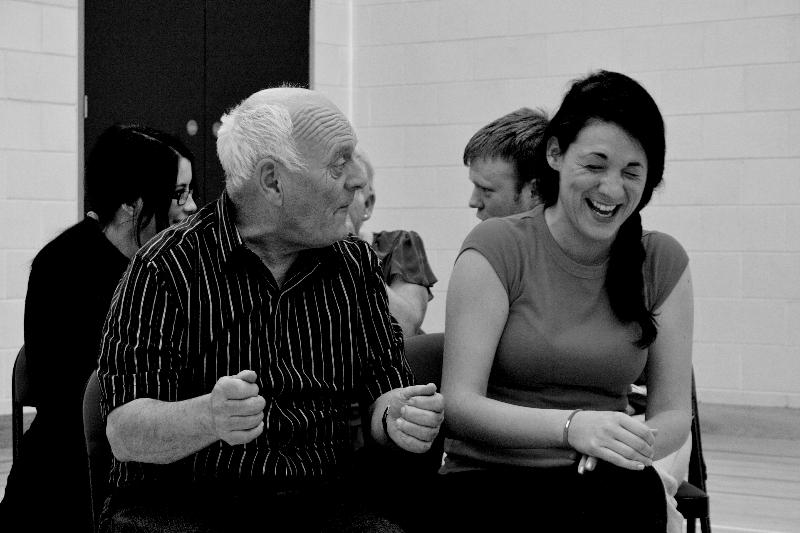 MemoLab Panel Discussion and Musical Performance with artists from State of the Art: Transformative Memories

Dorcus Atyeno, an activist from Uganda, presents on the Beads Project, a Ugandan textile  on display as part of the State of the Art: Transformative Memories in Political Violence Multi-Media Exhibition and talk about the Women’s Advocacy Group from Uganda who created the paper beads mural. The Women’s Advocacy Network (WAN) is an association of women working for a better future after a long war in northern Uganda.  The women were abducted as schoolgirls by the Lord’s Resistance Army, (LRA) who fought the Government of Uganda between 1987-2008 and forced into so-called marriages with rebel commanders with whom they bore children.  On return, the women organized to support each other, share their stories, and encourage each other, telling their stories as survivors of conflict related sexual violence so that others with know exactly what happened. WAN has collaborated to tell their stories for more than a decade with the Transformative Memory International Network members Erin Baines (University of British Columbia) and poet Juliane Okot Bitek (Queen’s University) through life history books, publications, poetry and art.

Alit Ambara is a visual and graphic artist and cultural activist from Indonesia. Alit talks about his work as a visual artist specialising in poster art and his work as the founder of Nobodycorp Internationale Unlimited, an initiative to encourage serious discourse about social or socio-political issues through its posters. Alit’s work can be seen in the State of the Art: Transformative Memories in Political Violence Multi-Media Exhibition at the Chocolate Factory.

Facilitators Dr Pilar Riaño-Alcalá and Dr Erin Baines from the University of British Columbia talk about the development of the Transformative Memory Network and their work with  artists from Canada, Uganda, Indonesia, Northern Ireland and Ireland.

MemoLabs are a series of talks, workshops and performances held as public events and taking place from the 14-16 October 2022, Dublin and 17-21 October, Belfast, as part of State of the Art: Transformative Memories in Political Violence Multi-Media Installation and Exhibition in the 2022 Dublin Arts and Human Rights Festival. MemoLabs bring together artists, activists, community members and the public to explore the arts and themes of equality, human rights and Transformative Memories in Political Violence.

Based in Kampala, Uganda, Jeff Korondo is an artist who has been performing in Uganda since 1990. He has written, produced, and performed songs on the reintegration of ex-combatants, empathy, the International Criminal Court (ICC), defilement, child sacrifice, malaria prevention, women’s rights, and children’s rights, among others. His music has inspired and encouraged peace and reconciliation in Uganda.

His 2008 album ‘Okwera Nono’ (You Reject Me for Nothing) discourages community members from stigmatizing former abductees and ex-combatants who are reintegrating into society. He has partnered with organizations such as Save the Children, the Concerned Parents Association, and the Northern Uganda Malaria AIDS and Tuberculosis (NUMAT) program to conduct sensitization campaigns involving advocacy songs and community performances.

He is a graduate of Gulu University, where he has pursued a Bachelor’s degree in Information Technology. He is also the owner of Link Printers, one of the only local printers serving post-conflict northern Uganda.

Roberta Bacic is a Chilean Human Rights advocate and researcher living in Northern Ireland. Since 2007 she has curated more than 150 international exhibitions of arpilleras and associated events in museums, universities, art galleries, embassies and community spaces worldwide. Over time, these exhibitions have expanded from Chilean arpilleras focused on the Pinochet dictatorship, to include quilts and other textile narratives of loss, resistance, testimony, protest and healing from around the world. The use of textile language in contested spaces has been at the centre of her curatorial work.

In 2017 Ulster University hosted an international colloquium attended by academics from nine countries. At the centre of this event, Bacic curated Textile Language of Conflicts, an exhibition open to participants, the academic community, schools and the general public.

You can access her work on https://cain.ulster.ac.uk/conflicttextiles/  at CAIN, Ulster University, which holds and documents her CONFLICT TEXTILES collection. The material collection currently comprises 398 documented textiles.

Docus Atyeno Hails from Africa, Uganda and particularly from the Northern region. She holds a Bachelor’s Degree in Public Administration and a Diploma in Computer Science from Gulu University in Uganda. She Studied Fundamental Framework for Peace building, Peace development, conflict analysis and Understanding response to stress and trauma in the great lakes region from the Great Lakes Peace Institute(GLPI) in Gitega, Burundi Africa.
Atyeno Docus is a project officer at Justice and reconciliation Project (JRP) under Gender Justice Department; she has worked for JRP since 2014 up to date, she is responsible for project formulation, implementation and monitoring processes. Docus has worked to advocate for peace building and rights of fellow conflict affected women and children especially in enhancing justice and accountability for women affected by Lords Resistant Army(LRA) conflict, participated in documentation of SGBV experiences to increase insights and understanding into Northern Uganda’s conflict sexual violence. She has taken a lead in the reintegration of children born from captivity helping to facilitate reconciliation between the families and enhance sense of identity and the wellbeing of the children. Participated in different research to understand the Transitional Justice needs and concerns of war affected communities in Northern Uganda. She has also taken a lead in the implementation of Livelihood Projects and the Programme for Connecting Survivors, Strengthening Voices and Creating Sustainable Change among SGBV survivors in Northern Uganda region especially in war affected areas.
Last but not least Docus took a lead to support the family of the missing persons of conflict in the processes of coping with grief and emotional healing through counseling sessions

Alit Ambara (Indonesia) is a visual and graphic artist and cultural activist who has engaged in various movements for upholding human rights and social justice in Indonesia and Timor Leste since the early 1990s. He received his BA from the Jakarta Institute for the Arts and MA in art history from Savannah College of Art and Design. Since 2009 he has intensively used posters to respond to social-political issues. Under the label Nobody Corp. Internationale Unlimited he regularly disseminates political messages in thousands of images through various social media channels. He believes that with social media channels  – which are flexible and open to the public – the artistic possibilities for responding to countless issues of injustices are endless. Website link: https://indoartnow.com/artists/alit-ambara