Marta Hillers (1911-2001) is famous for publishing her memoir Eine Frau in Berlin (A Woman in Berlin) under the name ‘Anonyma’ in the 1950s. A journalist in various newspapers and magazines in Nazi Germany, she was in Berlin for the final days of World War II. In her ‘series of unsentimental diary entries’ that formed her memoir, she told her story of these final days. Hillers was hiding from Soviet soldiers in a basement, but was eventually found. She was raped and abused multiple times by the soldiers of the Red Army. An estimated 100,000 women were raped at this time in Berlin. In order to protect themselves, many women, including Hillers, made themselves available to the highest-ranking Soviet soldier they could find. Hillers described this as ‘sleeping for food’. To the soldiers, women were simply the spoils of war. 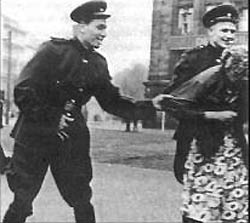 Her memoir raised important awareness of an often overlooked atrocity of World War II, that of the wide-scale abuse of women. It was already published in a few countries when it came out in Western Germany in 1959. Many German reviews were hostile, accusing Hillers of immorality, of ‘besmirching the honour of German women’, and of financially benefitting from a sickening story. Hillers soon retired from journalism and did not allow any new editions of her book to be published during her lifetime.

The book seemed almost forgotten until the year 2003, when the renowned German author Hans-Magnus Enzensberger arranged for posthumous publication. It quickly became a bestselling title, and entered into public debate as part of recognising all the cruelties of World War II. Eine Frau in Berlin remains crucial in appreciating the suffering of women in war, past and present, and galvanises us to prevent such occurrences from repeating themselves in modern day conflicts.

For more on Marta Hillers, go to page 40 of the Smashing Times’ Women War and Peace Research and Resource Book, available to access free of charge here.